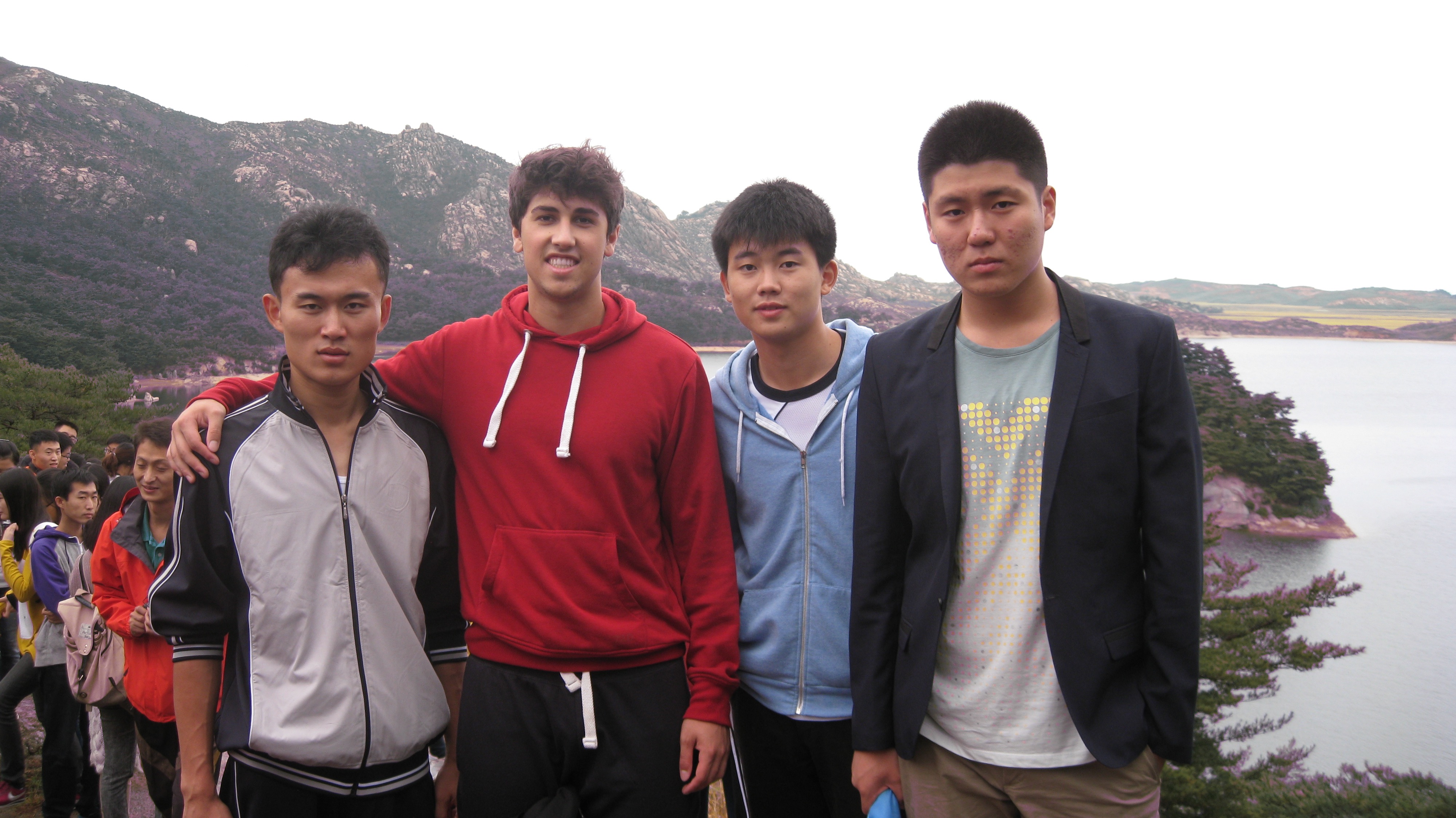 I hold the rather bizarre distinction of being the first ever western student to study in North Korea. On the odd occasion somebody hears this and buys me a drink –it’s happened twice- they tend to want some short, pithy wisdom spiced with stories of gulags and forbidden teenage romance. After countless occasions –twice- I’ve managed to distil the fundamentals into simple observations that satisfy both my drink-suppliers and, more importantly, retain the element so rare in conversations about North Korea: the element of truth.

Some of these observations have direct application to our own lives, while others are just interesting in their own right.

Given the western world has such a bias against North Korea, we’ll invert the order and start with…

North Korea: two words that evoke images of nuclear weapons, a totalitarian state and the ubiquitous Great Leader. But what is the root of it all? The answer: thought, or lack thereof.

I spent 4 months studying at Pyongyang’s Kim Il-Sung university (the first eponymous Great Leader), where I lived with an English-speaking North Korean roommate, Ri. He and I used to walk to lessons together every morning. Ri was a smart guy, cheerful too; he was the kind of friend who’d look for the good in every bad situation. Being intelligent, he found it most of the time. On the way to lessons, we’d joke and tease each other about who’d said what to which girl or who’d been told off for being hung-over (hint: it wasn’t me). Until we passed the giant bronze statue of the Great Leader in the middle of campus. Then humour withered on his lips and died in his eyes. Then we bowed deeply to this object of supreme authority. Only when we were out of sight of the statue did conversation haltingly resume.

One day I finally asked Ri what would happen if somebody didn’t bow. It took several attempts until he actually acknowledged the question as genuine; after all, as he put it, “Why wouldn’t you bow, he’s the Great fucking Leader?!”.

Everyone thought the same way, dressed the same way and spoke the same way. Sameness was safety. As the Japanese say, “The nail that sticks out gets hammered down”.

One of my teachers once spent five minutes trying to explain what a banana was. Another asked me if we had four seasons in Europe too. Ri spent a good 10 minutes trying to remember when homosexuality had been invented; he could’ve sworn he knew this, he complained, face screwed up in concentration.

From the little attention I paid to Biology in school, I couldn’t tell you much about the digestive system or enzymes, but I can remember a simple maxim my teacher taught us about evolutionary adaptation: isolation precedes death. Not just in organisms but in states and individuals too. I can vouch for that myself. After 4 months of mental isolation –not having been able to speak freely to anyone- I suffered a near nervous breakdown when I got home.

North Korea has isolated itself and been isolated in turn by the international community. People believe what they’re told because it’s the only thing they’re told: there is no other source of information. I’ve seen first-hand that knowledge is power. 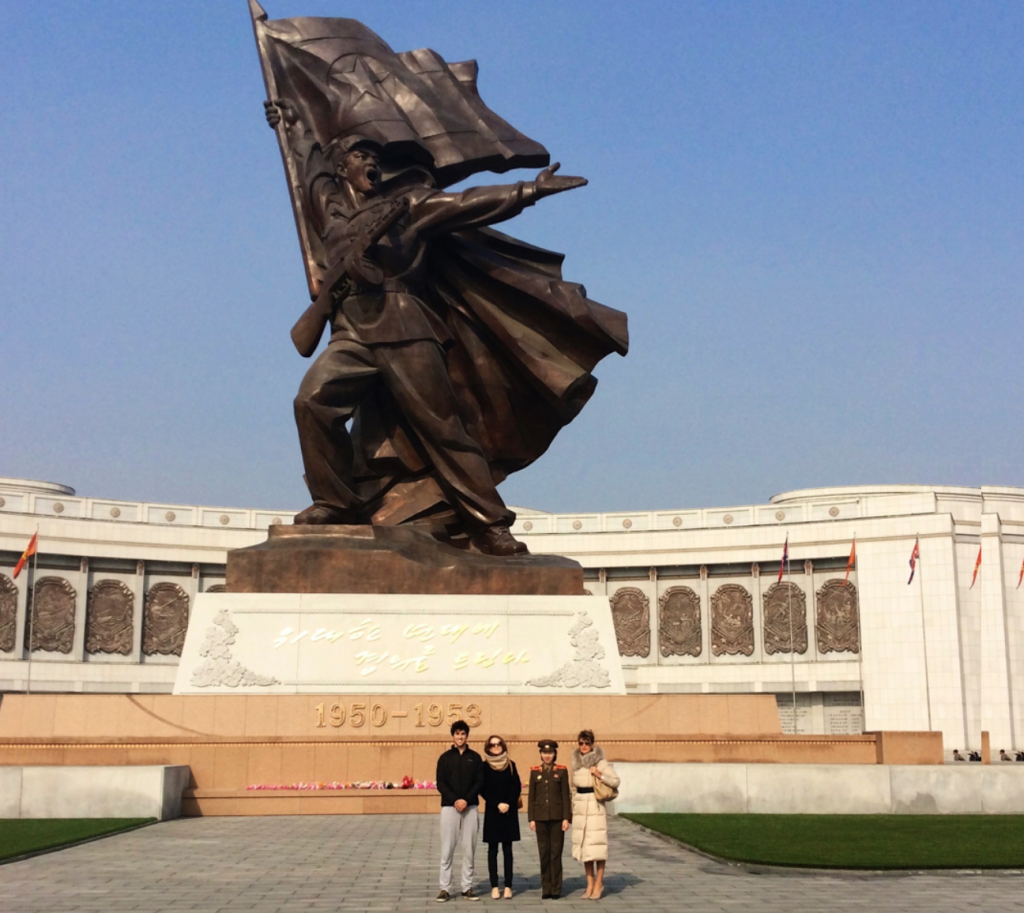 Ri almost had tears in his eyes when he told me the best moment of his life. He was interpreting at a state dinner for the vice-president of Zambia he said, as I nodded encouragingly, quite impressed. The Respected Marshal comrade Kim Jong Un was at the dinner. The Respected Marshal approached the Zambian delegation Ri was interpreting for, and –here Ri’s eyes glazed over wistfully- they made eye contact.

North Korea is a secularised state in name only. The Great Leader is worshipped everywhere in this land of “atheists”.

Every North Korean I met had an aversion to risk-taking that bordered on the pathological. They were all relatively privileged inhabitants of Pyongyang which meant they all had plenty to lose.

I had multiple teachers over my time there so that no one bore the full responsibility for the success or failure of my studies. Ri wanted to be a businessman but caved in to the safety of interpreting. Another friend, who was on leave from the army, was unhappy at the responsibility that came with his new promotion: he missed the days where he followed orders and didn’t have anyone to look after. 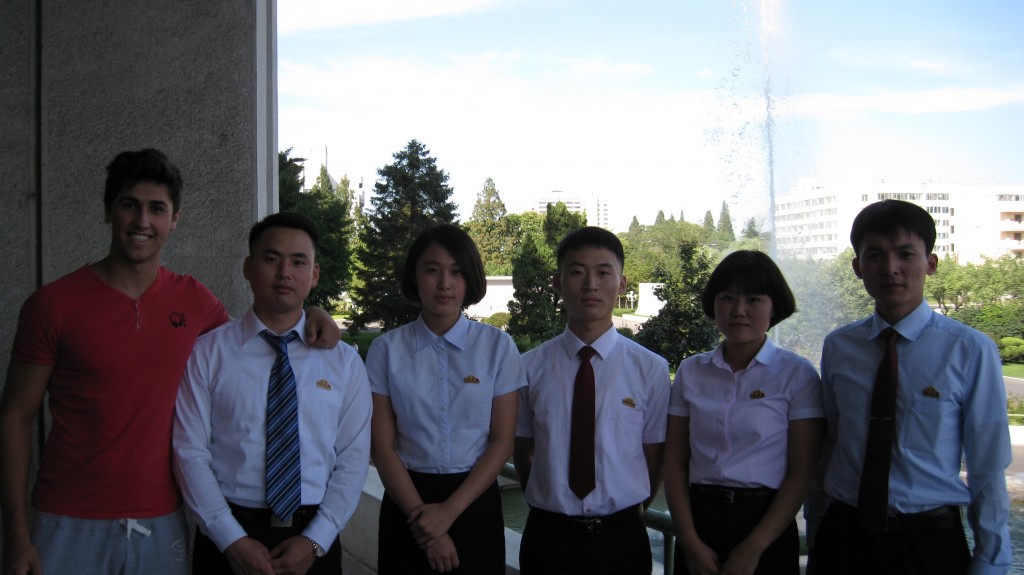 Asian culture in general, and especially North Korean, is communal. The individual doesn’t really exist as an independent unit, he is a piece of his family, his friends and his social circle. From the moment I arrived, I did everything with Ri and other friends. We ate together, we washed together, we walked to and from lessons together. Nothing was private, not any more. Even going to the toilet, people left the doors open so they could continue conversations.

One day I’d had enough and tried to explain to Ri that I needed my space. I was quite an individualist. He laughed. “That’s a western concept” he said, “we don’t have that here”.

For all the positives it undoubtedly has, constant community has drawbacks. Lack of individual freedom is one. Not having the space to think properly is another.

Sex before marriage is a big no-no in North Korea. Ri was an ordinary 22-year-old virgin who’d never had a proper girlfriend. My army friend had a girlfriend he went on long walks with. He only saw her a few times a week. He predicted they’d marry in a few years.

Girls were very proper and meek; the louder ones were viewed as less attractive. Ri rated submissiveness as one of the key traits in a wife.

My romances with North Korean girls went no further than lingering eye contact over meals, although it was more for the forbidden thrill than anything. They weren’t interested in a foreigner who’d be gone in a few months and I wasn’t interested in the North Korean feminine ideal. Alas, it wasn’t meant to be.

I’ll finish with the good to inject some positivity into a thoroughly depressing list. The good is also something people don’t often want to see in North Korea. It all starts with recognising…

7. …We’re all fundamentally the same

Your average North Korean doesn’t wake up thinking “Death to America”, he or she wakes thinking about the same things you think about: the day ahead, how early it is, what’s for breakfast. We want security and prosperity. We want our life to have meaning. We want to be accepted. These motivators apply to all humans. Maslow’s hierarchy of needs doesn’t stop at borders.

In many ways, once you got past the initial culture shock, living in North Korea was mostly like living anywhere else. You talked about the weather, you worked, you went for a beer with friends; life was just a series of innocuous days and events, the majority of which fell under the category of “average”. Of course, there were also insane conversations, scary moments and days where you’d just start laughing to yourself about how unreal this all was, but those were the minority. 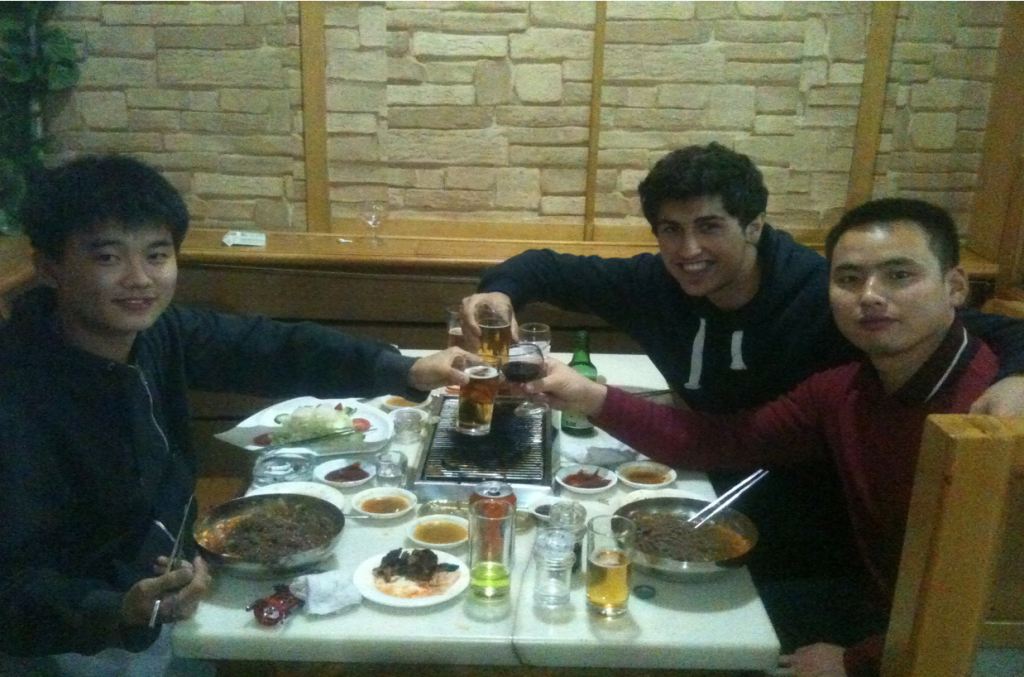 In December 2014, the month I left Korea, the power in our dormitory stopped working. -22 degrees centigrade outside and we were left with no heating and no running water. Light remained, albeit with the occasional power cut.

Nothing changed. All the North Koreans just shaved with cold water, wore extra layers and shivered more. I don’t think I ever heard someone complain.

They just got on with it. Work, cold, lack of sleep, hangovers; nothing phased them.

At the beginning of my stay I tried to get rid of Ri by inviting him for a run. I’d be an avid runner through my teenage years and was significantly stronger and fitter than he was. He fell behind after the first 20 metres. He stayed there for the next 20 minutes as I ran faster and faster until I was virtually sprinting away from him. I’d look back and see him stumbling along behind me, covered in sweat and teeth gritted in obvious pain. He didn’t walk right for days. Never said a word.

North Koreans are hard working, tough and stoic people. The worst thing to say about someone is to say they’re lazy. Mean: fine. Stupid: acceptable. Ugly: no one cares. But lazy? Not a game you ever want to play with a North Korean.

9. Life is simpler when there’s less in it

In Pyongyang, I lived life well within the highest 1%. There was no internet, a broken TV and a rusted basketball hoop in the courtyard outside for entertainment. We used squat toilets, washed by filling buckets with water and ate the same few dishes week after week. I slept on a hard bed, with a mattress so thin it was an insult to call it a mattress. I saw cockroaches scuttle around my bedroom so often, I once apologised out loud when I stepped on one.

In short, the environment was cold, spartan and miserable. It’s without a doubt the thing I miss most about North Korea.

There were no adverts anywhere, buildings were mostly painted grey and white and people carried sacks of food home with them in wheelbarrows –the family’s potato or kimchi rations for the week.

There were no distractions. I’d never been so productive in my entire life. I woke early to workout while it was still dark, then a cold bucket of water to wake me up before ending the routine with some meditation. All before breakfast.

When I got back home, everything was wrong. My bed was too soft, my light was too bright, there were too many colours everywhere; it took time to re-adjust. My first few hours out of North Korea were spent looking at the dull floor of Beijing airport until I got my bearings again.

I’m not advocating becoming an ascetic and finding a nice cave to live in, but limiting your choices is a marvellous way to get things done.